The GMAT (Graduate Management Admissions Test) score is a fundamental aspect of your MBA Admissions process, and therefore should be carefully considered. Here we will discuss the different aspects to keep in mind when targeting a specific GMAT score.

The GMAT is comprised of three separately scored parts:

The overall score is the result of the GMAT Quantitative and GMAT Verbal sections combined. Therefore, the overall score can be divided into two separate scores for its sub-components:

It’s important to keep in mind that these are NOT the amount of questions you get right. Since the GMAT is an adaptive Test, different questions are worth different scores, depending on how challenging the GMAT Test considers the question to be.

In essence, the GMAT Test taker can expect to receive 5 scores, 4 of which are generated automatically upon completion of the test. Only the Analytical Writing Assignment depends on a human to revise and score, therefore it takes approximately 10 days to appear on your mba.com profile.

Interestingly enough, a 99% percentile in the GMAT total score today is attributed to any score from 760 to 800, because this range would be equivalent to the results of the top 1% Test takers. 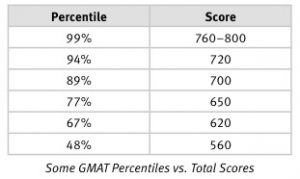 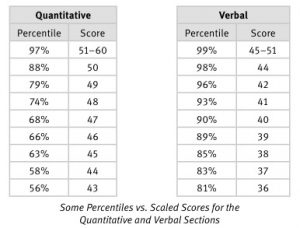 What is a good GMAT score?

To keep things in perspective, according to mba.com, two thirds of all test takers score between 400-600 on the GMAT, so any result up to 600 would be considered average. In general, business schools are seeking candidates that can deliver a better than average GMAT score, but this depends on several different factors that vary according to the candidate’s academic and professional background, as well as the business schools they are targeting.

For instance, a low GPA or lack of professional experience can be offset to some extent with a higher than average GMAT score. And while a 780 GMAT score may sound undeniable, several candidates with such perfect GMAT scores are turned down every year, which proves that the MBA application is just as important as the GMAT Test per se.

That is the reason why MBA House works both the GMAT and Admissions Consulting at the same time, as an integrated project. That way, our Admissions team can coordinate with the teachers a plan that takes into account the candidates objectives, and allow them to save time and achieve their goals.